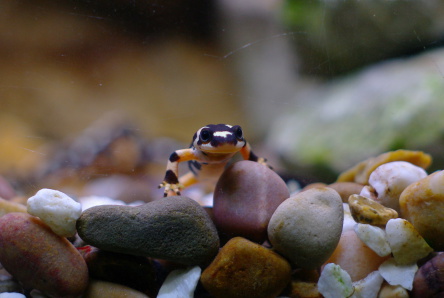 We have on site a group of Kaiser's newts (Neurergus kaiseri).

This fascinating little species of newt is found in a very small area in the wild, their natural range spans around 10 square kilometers in the Zagros Mountains of Iran.

Due to this, until recently they were classed by the IUCN as Critically Endangered.

A Critically Endangered (CR) species is one that has been categorized by the International Union for Conservation of Nature (IUCN) as facing an extremely high risk of extinction in the wild.

After a period of data collection and captive breeding, this species has now been downgraded to Vulnerable.

A vulnerable species is a species which has been categorized by the International Union for Conservation of Nature as likely to become endangered unless the circumstances that are threatening its survival and reproduction improve.

This means that whilst there is no need to be producing captive bred populations with urgency at the present moment, the more populations we have in captivity, the quicker and easier it will be to establish genetically diverse breeding programmes with these individuals, should their population take a turn for the worst in the wild. We are in contact with other collections around the country who house this amazing little amphibians, ready to start a breeding programme should the need for one arise.